As is often the case, it’s sometimes when you find yourself immersed in trying to build a career and care for your family that life makes you pause and reflect on those blessings, and makes you see things through a wider lens…

The meaning of life could be found in Giving. 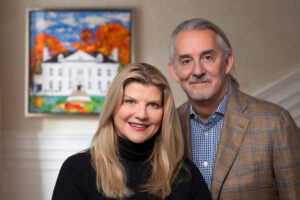 When you use your skills and resources to contribute to the well-being of others, life is richer for it.

Scott Miller spent the first half of his life establishing successful careers in the competitive world of high-tech and government contracting. While the accomplishments of both he and his wife, Sharon Virts, are significant, philanthropy is the real driving force of their lives now.

Fiercely entrepreneurial, Sharon started her first company at the age of 29, and another a few years later. In 2002, with four sons at home, she founded FCi Federal. She grew the company from 35 in 2007 to 5,000 employees in 2017 when she sold the business.

It became clear to Sharon and Scott, as they built their lives in the historic town of Leesburg, Virginia, that there were needs in the community that were not being met, in spite of the general affluence ascribed to the Loudoun County community as a whole. In 2016, Sharon established the Sharon D Virts Foundation to directly address these issues. Sharon’s vision established the pillars of the Foundation: Education, Culture, Health, and Opportunity.

To date, the Foundation has supported over 30 organizations, including:

Along with her work with the Foundation, Sharon is also an author of historical fiction. Her first novel “Masque of Honor,” was released by Rosetta Books and distributed in print by Simon & Schuster on February 9, 2021.